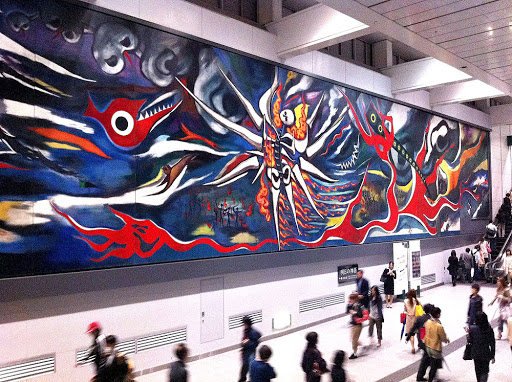 In the autumn of 2003 the huge mural, ‘Myth of Tomorrow’, that had long been thought lost, was discovered in a Mexican suburb.

This mural features an image of the tragic moment in which an atomic bomb explodes.
However, it is not simply a picture of the victims.
The powerful message contained in this work by Taro Okamoto is that human beings are capable of proudly overcoming even the cruelest of tragedies and giving birth to ‘a myth of tomorrow’.

Created at approximately the same time as his ‘Tower of the Sun’, this work and the tower were said ‘to form a pair’; it is one of Taro Okamoto’s greatest works and is indispensable in tracing the course of his art, making it extremely valuable.
Unfortunately, however, it was abandoned in poor conditions for many years, resulting in it suffering major damage. It was at this point that a restoration project was established within the Okamoto Memorial Foundation to ship the work back to Japan, renovate it then place it on display where it could be seen by as many people as possible.
The mural was transported to Japan and restoration work completed by June 2006, with it going on display for the first time at Shiodome in July of the same year. It was only shown there for fifty days, but despite the limited period, it succeeded in attracting approximately two million visitors.
Next, the work was shown at the Museum of Contemporary Art Tokyo (MOT) from April 2007 to June 2008. In March of 2008 it was decided that it should be placed on permanent display in Shibuya station and since November 18 of that year, it has been installed in the walkway connecting the rail station with Shibuya Mark City.
With the support of numerous people, the ‘Myth of Tomorrow Restoration Project’ has succeeded in reaching an important milestone and we would like to take this opportunity of express our deep gratitude to everybody involved.
The story of the ‘Myth of Tomorrow’ will continue, and your future support will be greatly appreciated.

A Message from Toshiko Okamoto for ‘Myth of Tomorrow’

The ‘Myth of Tomorrow’, which depicts the instant of an atomic bomb explosion, is Taro Okamoto’s largest and greatest masterpiece.
An evil mushroom cloud, with vast destructive power, grows as it rises in the sky, while below, skeletons can be seen burning. It is a moment of tragedy and brutality.
Innocent creatures try to escape. Insects, fish and animals, can be seen scattering as they attempt to flee the picture, heroically summoning their last reserves of strength. The fishing boat, Daigo Fukuryumaru, also appears, hauling in its catch of tuna without realizing it was exposed to nuclear fallout. Behind the burning skeletons in the center, the silhouettes of dead people can be seen emitting small flames and forming a line that continues endlessly. Furthermore, they are also being attacked by the sinister black cloud overhead.
It is a world of tragedy.
However, this picture is not just the usual image of an atomic bomb, depicting the wretched, unsightly victims. The indescribable beauty and nobility of the burning skeletons; the vivid red of the dancing flames that dominate the vast picture, spreads across it in an almost elegant fashion.
The ends of the ever-expanding mushroom cloud remain like newborn babies, their innocent faces looking down at the world below in surprise.
The furiously expanding composition of the picture. The powerful prime colors. The whole picture roars with laughter. It does not give way to tragedy.
In the moment that this sinister power of destruction explodes, it is rivaled in intensity only by human pride, which burns with pure indignation.
The title, ‘Myth of Tomorrow’, is symbolic.
This moment does not spread only death, destruction and sterility. Although connoting a cruel tragedy, it simultaneously proudly marks the birth of a ‘Myth of Tomorrow’.
This is what Taro Okamoto believed. The picture represents a poignant message from him. It is a pure, clear cry that cannot be transmitted any other way than through art.
The purity. The furious disconnectedness that can almost be described as lyrical.
The twenty-first century is an insecure time and we cannot see what the future will bring. Terrorism, revenge, endless slaughter, nuclear proliferation, the ominous spread of viruses… we appear to be following a path that will lead to the irreversible destruction of the earth. At a time like this, the picture sends out a strong, sharp message.
I will never be beaten! The whole picture roars with laughter, exploding with great pride.

‘Myth of Tomorrow’ ― A Chronological Table