Taro Okamoto had liked the color “red” since childhood, saying, “It feels as if I was born from red and live my life in the midst of red,” and restarting his activities in Japan after the war, he made a sensational debut. He stirred up the Japanese art scene, daringly employing powerful primary colors to challenge the “grey world” of traditional aesthetic values.

He particularly liked an “intense red, suggestive of blood” and there can be no doubt that this “blood red” formed an important element in determining the identity of Okamoto’s paintings.

In contrast, Okamoto also began use “black” positively in his painting during the 1960s. Black, abstract motifs resembling Sanskrit characters took a dominant role in his work, creating a dark, ominous, magical world.

“I have choosen the black road that leads to my doom, or rather, in the direction where I will be forced to confront death.”

I am sure that for Taro, “Black” was not just another variety of color, but was the symbol of a way of life.”

This will be our first exhibition to be held using color as its theme.

Red and black. Won’t you come and experience the world these two colors embody? 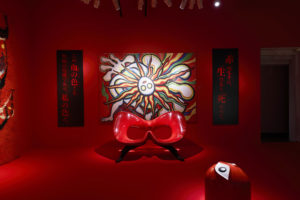 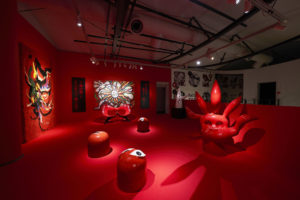 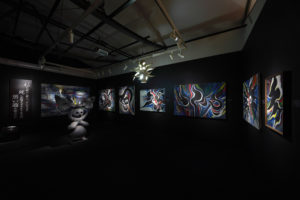